What are Dueling Pianos?
Dueling pianos can best be described as two piano players who also sing, performing on two pianos that face each other, playing UPBEAT songs that everyone loves and recognizes, while throwing in some good natured comedy for good measure.  The rules of engagement typically involve an all request environment, where the audience members write down requests on little pieces of paper or sticky notes, include a tip if they want their song to have a better chance of being honored.  The audience members take their pieces of paper with their requests written down on them and put them on top of the pianos.  Soon the pianos are full of requests and the dueling piano players start to work their way through the requests, typically starting with the biggest tips first. 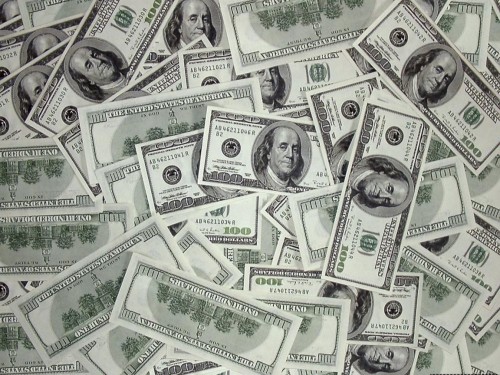 Tipping Dueling Pianos- How Much?
If a request has a $100.00 bill attached to it, then it will probably get played before a request with a $20.00 bill on it.  Alternatively, requests with no money attached to them - well, those are what dueling piano players refer to as "suggestions" and they may or may not perform those requests at all.  Tipping really depends on how badly you want your song played.  It also may depend on how quickly you want your song played.  Tipping is also a good idea if you are requesting that the dueling pianos do something special for you like bring up a birthday girl, etc.  There really are no rules or regulations when it comes to tipping the dueling pianos, it all depends on the situation. 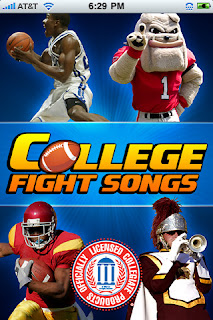 One sure way to get the tips flowing is to start a College Fight Song challenge.  This is especially effective in smaller rural cities where their college teams mean EVERYTHING to them, since most small towns do not have professional teams (see Iowa, Nebraska, Oklahoma, Kansas, and Arkansas for examples) - since these towns don't have any professional sports teams, they put all of their energy into their college teams.  The best way to get the tipping started is to start out by naming a few local colleges over the microphone and start getting everyone fired up.  If you're in Nebraska yell out "Go Big Red!", or adversely you could yell out "Go Jayhawks!" and watch everyone start to BOO!  This gets the rivalry cooking and here comes the classic act of the dueling pianos college fight song tipping war.  The dueling pianos will usually call out the name of a popular college in the area and start playing their fight song, they announce that they will continue to play that college's fight song until someone brings up money, and requests a different (usually rival) college fight song.  An so it goes, the KU Jayhawks fan brings up a $20, then the Iowa State fan brings up $40, then a group of Oklahoma fans pool their money together and raise $200 for their song, and so on and so on.  We have seen this tipping war go on for a very long time and the tip jar can fill quickly with several thousand dollars.  Most dueling pianos performers make more than doctors, if they know how to garner tips. 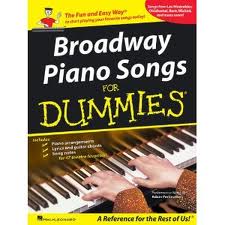 What Dueling Pianos is NOT
Dueling pianos are NOT two guys sitting at pianos trying to compete with each other.  They are also NOT two piano players sitting there performing the song from the white trash movie Deliverance.  Dueling pianos is not an environment where you should request boring old musicals, Broadway show tunes, or especially do not request classical piano songs or old time piano songs by Scott Joplin.  Dueling pianos is NOT that kind of party.  It's always so funny to walk up to the piano and see a request for "Blue Danube" or "The Entertainer" or "Moonlight Sonata" by Beethoven.  Wrong, wrong, wrong!  You have the wrong idea.  Do not request or expect the dueling piano players to perform anything slow or boring that will grind the party to a halt.  Watch out, if your requests are too lame, one of the pianists might actually make fun of you over the microphone to the entire audience.  When you request songs for dueling pianos, think of sing-a-long songs.  Songs that everyone can sing along to, those are the songs that you want to request.  Crowd participation is a HUGE part of the show, and if one of the piano players goes into 10 minutes of classical piano pieces, they are going to lose 90% of the audience right there.  Or if the pianists were to perform 15 minutes of obscure Broadway show tunes, it would bore almost everyone to sleep instantly.  Another thing to remember is that just because a song is famous for being played on a piano does not make it a dueling pianos song.  Just because "Brick", or "The Luckiest" by Ben Folds are songs that feature the piano does not mean that the audience wants to be depressed to death watching the piano players perform these sad songs.  Dueling pianos is an art form that is based on upbeat, energetic performance songs that everyone will recognize and sing along or dance along to. 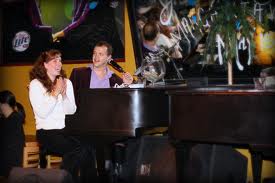 
A big part of a great dueling pianos show involves an element of comedy from the piano players, or as they call it in the business, "schtick".  The pianists will either implement comedy within the songs that they play by adding funny words to them, or they will do comedy bits in between songs.  The comedy can extend to embarrassing members of the audience, for example many fans of dueling pianos will get a group of friends together when it is one of their birthdays and take them out to a dueling piano bar.  The dueling pianos will get the birthday girl or guy up on stage, and commence to humiliating them in numerous ways.  We don't want to give away any secrets, as many dueling piano players have their own ways of dealing with birthdays, but let's just say the tomfoolery can range from turning a guy into a human "stripper pole" to singing an embarrassing song to a girl about her body parts, etc.  Dueling pianos are also perfect for bachelorette party goers.  Dueling piano shows can range from Rated G to Rated R or even Rated X in some cases, most commonly if you are in a dueling piano bar you will be watching an R - X Rated show, whereas in a corporate or wedding environment you can expect a Rated G - Rated PG-14 performance.  As with any comedy routine, the amount of "blue comedy" can vary between every dueling piano act.

BEWARE OF CHEAP IMITATORS!  There are some "fly by the seat of their pants" dueling pianos out there who show up dressed like bums, bring plastic cheap keyboards on stands instead of pianos, and if they are part of the chain dueling piano bars like "scowl at the goon" and "bernie gags" (not their real names, but you get the point) - they will send out their WORST pianists and cheap sound and lighting equipment.  Trust us, we've seen it, and you don't want it.

BIG SHOW Dueling Pianos were voted "Entertainers of the Year" by WGN, Chicago